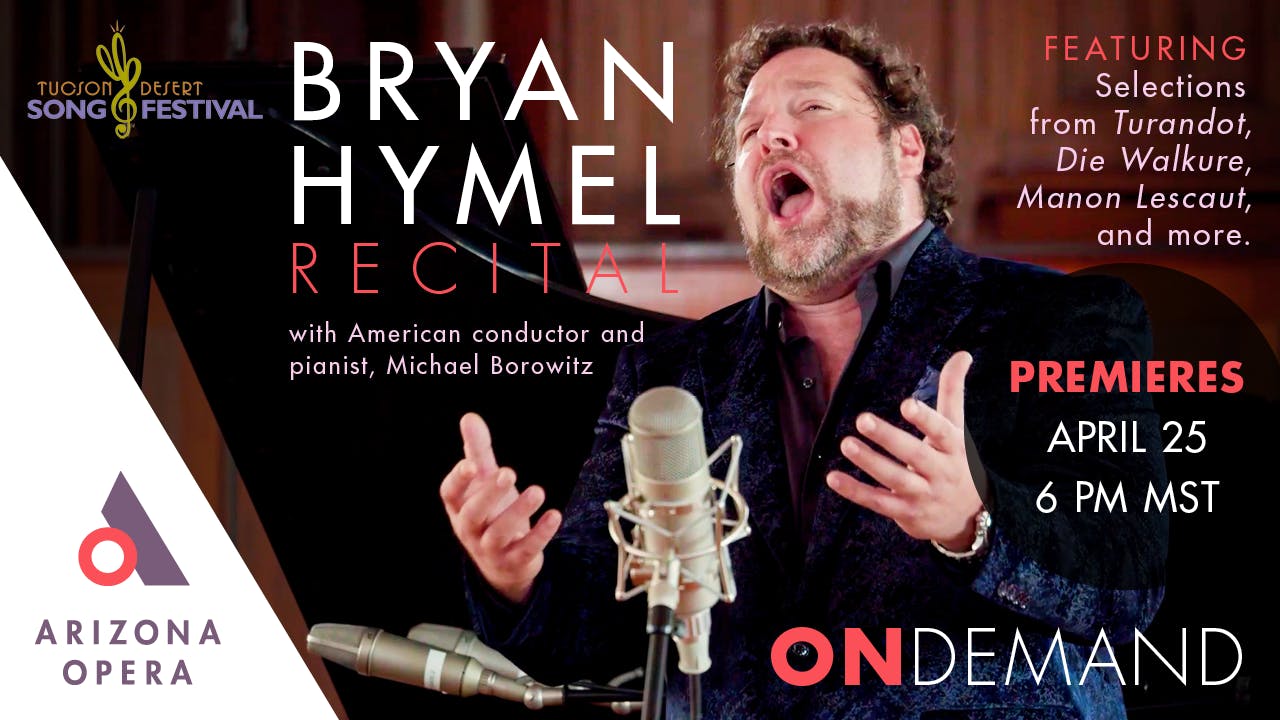 Join internationally renowned tenor, Bryan Hymel, for a dazzling vocal program, including selections from Turandot, Die Walkure, Manon Lescaut, and more. A winner of some of the most prestigious awards in opera, including the Beverly Sills Award and the Olivier Award for Outstanding Achievement in Opera, Mr. Hymel is joined by American conductor and pianist, Michael Borowitz. This program is presented in partnership with Tucson Desert Song Festival.

The Bryan Hymel Recital will premiere on Sunday, April 25 at 6 PM MST and be available on an on-going basis thereafter. Orders to view it may be placed beginning Friday, April 23 for a purchase price of $20.

Adelaide
LV Beethoven / F.V. Matthisson
This song is set to a love poem that depicts the woman Adelaide as her admirer compares her to the beauties of nature and how he yearns some day to be with her.

Four Hymns
R. Vaughan Williams
Lord! Come Away! (BJ Taylor)
Who is this fair one? (I. Watts)
Come Love, come Lord (R. Crashaw)
Evening Hymn (R. Bridges)
Following the composition of Five Mystical Songs in 1911, Vaughan Williams began to compose a smaller scale piece, which was completed in 1914. However, World War I delayed the presentation of the song cycle until 1920.

From Manon Lescaut
Donna non vidi mai
G. Puccini / L. Illica, M. Praga and D. Oliva
Des Grieux recounts his first encounter with Manon Lescaut where his soul awakened as he has never beheld a woman like her before.

From Turandot
Non piangere, Liu!
G. Puccini / G. Adami and R. Simoni
Prince Calaf faces execution if he does not solve the three riddles to win Turandot’s hand. Liù, who loves the prince, pleads for him not to do it but he tells her “Don’t cry” and asks her to continue to take care of his father.

From Otello
Dio! Mi potevi
G. Verdi / A. Boito
Under Iago’s manipulation, Otello has been led to believe his wife, Desdemona, has been unfaithful to him. He laments his fate saying he wishes that any other evil had come his way than her betrayal then demands her confession.

From Die Walkure
Wintersturme wichen dem Wonnemond
R. Wagner
Siegmund has promised Sieglinde to free her from a forced marriage. He compares their feelings to that of the marriage of love and spring.

From Herodiade
Ne pouvant reprimer les elans de la foi
J. Massenet / P. Milliet and H. Grémont
Jean has been arrested as a false prophet. Impending his execution, Jean says goodbye to all worldly attachments and questions God about his love for Salomé.

Parlami d/Amore, Mariu
C.A. Bixio / E. Neri
This song is about a man asking the beautiful Maria, with blue eyes like shining stars, to talk of love if only for tonight as her closeness causes him to no longer suffer.

Non ti scordar di me
D.E. Curtis / A. Martino
This song expresses the sadness of a man’s lover leaving without saying goodbye and how he pleads “please not forget him”.

Mattinata
R. Leoncavallo
This song, dedicated to Enrico Caruso, is about a man serenading a woman in the morning as he asks her to put on a white dress and open the door for him but she is not up yet.

Torna A Surriento
D.E. Curtis / G.D. Curtis
This Napolitano song begs a man’s lover not to leave but come back to Sorrento. He asks not for torment but to “make me live.”